The following is a post from my beautiful wife, Michelle. Thanks hunny!

The couch that started it all.

It was a fateful rainy day in Seattle.  Just a girl and her baby walking through a thrift store….and then….she saw it!  It’s what she’d been waiting all her life for.  The one.  The perfect floral couch!

I looked, I lusted, I sat and took a quick sniff….but then I left.  What in the world would I do with a crazy couch like that?  I already owned three couches, all of which I love.  Go home, Michelle, go home!  But first, post a photo on facebook!

I got home and had non-buyer’s remorse.  I just couldn’t stop thinking about it!  So after a little encouragement from friends and 27 comments later, I was all in. 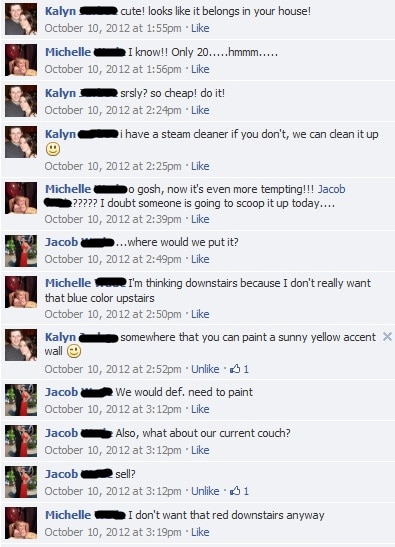 I called up the thrift store and bought it over the phone! Crazay!  I seriously had only sat on it for about a second, and gave it only a quick sniff.

The room was a dark red and had a super cozy, kind of cabiny feel to it.  I really liked that it was so cozy down there because that’s where we kept our TV and watch movies.  We don’t have cable or watch TV really, but the couch down there was good for snuggling so that’s where we watch the occasional movie.  I wanted to keep the cozy feel and didn’t want it a ton brighter but it was VERY dark down there, with the only window being the sliding glass door. 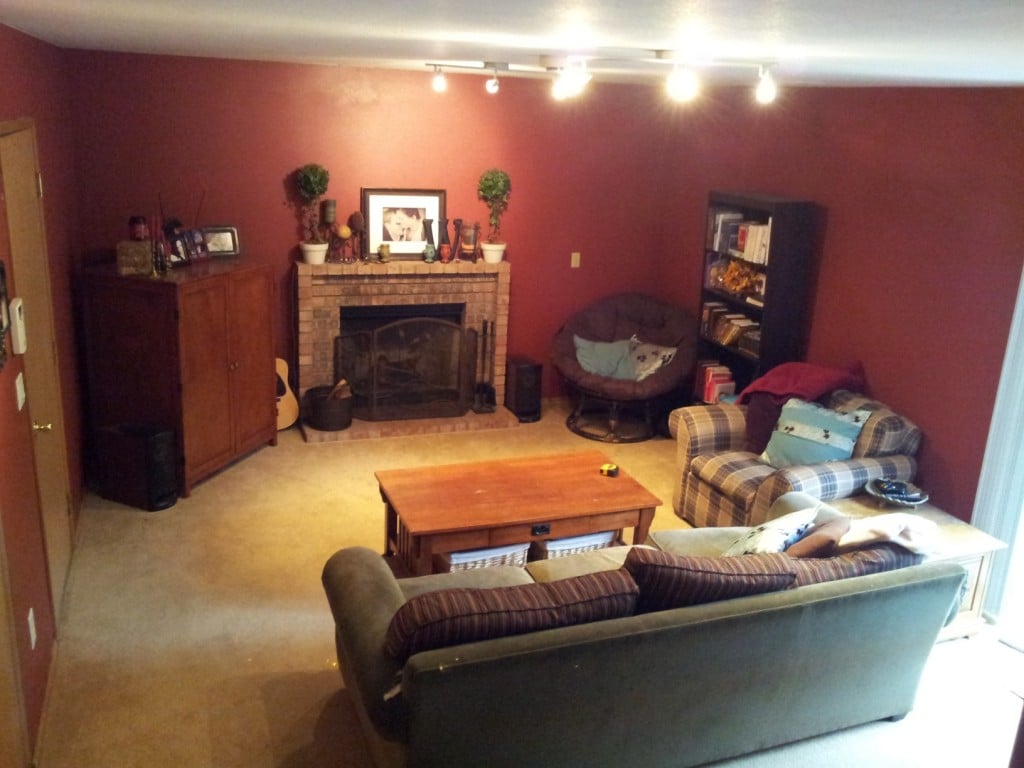 So I had to move the couch out of the room.  I didn’t want to sell it because it’s a Henrodon (read: super high end) sofa that we got as a hand-me down.  It has down-filled cushions and is SO comfy, so even though it’s not gorgeous, I chose to keep that one instead of the one we had upstairs.

The papasan was going to have to go, it wouldn’t work in any other area of the house.  The TV stand also wasn’t my favorite, we got it for free and I wanted something with more storage.  The coffee table is mission style and wouldn’t fit with the style of the new couch and didn’t go with any of the furniture upstairs.  Basically we emptied the room.

I really liked the paint color in the inspiration picture with the teepee.  I wanted a kind of greige that was cozy but went with the cool colors in the couch.  I wanted to do an accent color on the fireplace wall because it wouldn’t stand out very well with a paint color that’s the same color as the mortar.  I originally wanted an emerald green but after doing a digital mock-up decided I needed to go with something a little lighter.  Thanks to a good friend of mine who happens to be an interior designer I went with a happy yellow that goes a little green.  A great option, because it goes green, it’s on the other end of the color wheel from the red brick which is a great contrast.

We also picked up a new dresser turned TV stand that I am planning to re-do this summer by painting glossy white and snagged a new TV for an awesome deal too.  We found 2 perfect blue wicker chairs that are great for that room because we can move them around easily to create a lot of space for kids to play.  We still need to figure out a permanent solution for art/photos above the couch and I’m sure I’ll be switching out the photo above the fire place as I see that one permanently landing in our bedroom.  The bar area also needs some help but it’s getting there!

So total we were up $60 over what we had even paid for the furniture originally for a total of $260.  (AWESOME!)

Purchased furniture for a total of $130

That’s $130 profit we can use toward re-doing the office and other projects!! Yahoo!! Hoping to sell some more stuff this summer, maybe through a garage sale or something. And since we don’t game much, Jake could sell his Xbox games on musicMagpie.com for some free ca$h money if he doesn’t want to hassle with Craigslist people who buy electronics. They are a little weird. Just sayin’. Either way, we’ll see how many upgrades we can do for $0!

So here’s where we are now.

Of course there is a lot more I would like to do, like re-do the trim and doors all around the house to white instead of this awful fake wood, but all with time (and $$$).  The new colors and furniture layout has really opened up the space and made it more functional for our family’s lifestyle.  Life’s been super busy so there are still the outlets to replace with child-safe ones and it always takes me way too long to decide on art for the walls…but it will get there!  This is where we are now and I’m happy with it 🙂

Comments: What are YOUR current house projects? Have you set a budget for them?Stay tuned for more upgrades at the iHB household for a budget of $0!