I don’t make enough money each month to pay all of my bills. “Then who are you to give us peeps on the internetz financial advice if you can’t even pay your own bills?” Good question. Let me rewind a bit and talk a little about how we got here. 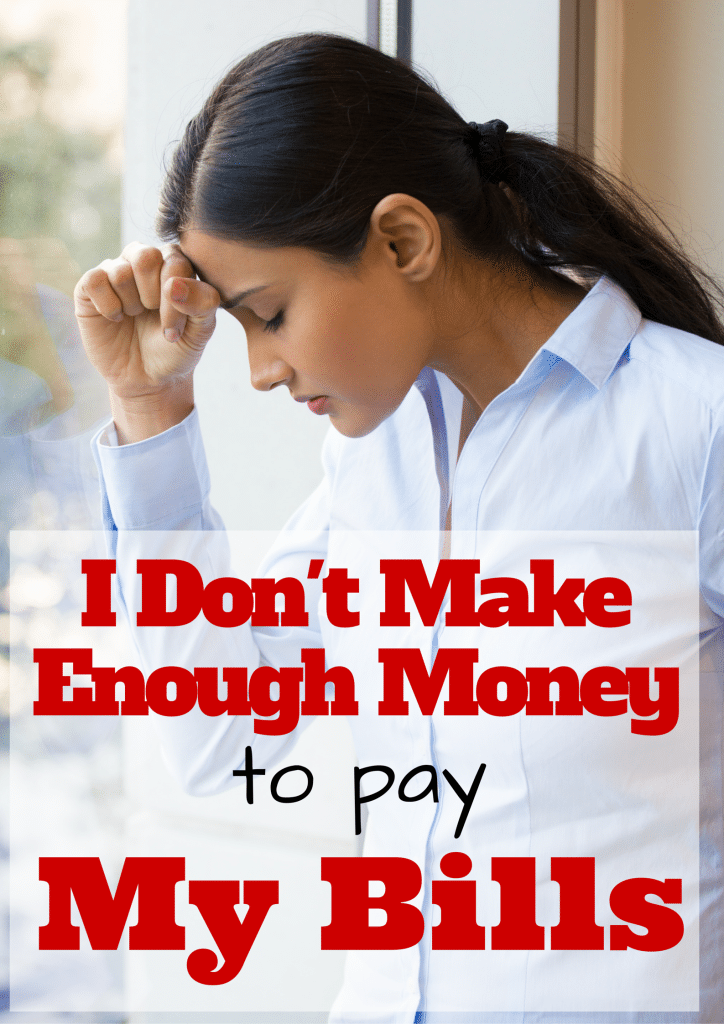 Ever since my wife was a little girl, when asked what she wanted to be when she grew up, she would always say “I want to be a mom!” She had an AMAZING role model growing up in her mom, so it’s no wonder she dreamt of becoming a great mother like her mom was, and to take on the noble task of raising our children. We were both in complete agreement that no matter what life had for us, when we had a baby, she would be at home. So with this commitment in mind, we started to set goals early in our marriage to achieve this.

When we started thinking about getting pregnant, it really lit a fire under me to start getting my income up. If we wanted to buy a house, have a kid, and go down to one income, I needed to be able to support that. After speaking with my church small group leader several times, I decided to get into taxes. I studied for an entire year, passed three I.R.S. sanctioned exams and became and Enrolled Agent. I started working for my small group leader as a part time tax preparer.

Though we knew we could be pregnant soon, we definitely had set buying a home as our #1 purchasing goal. We actually stopped aggressively paying down the student loan to save for a down-payment.  Now, as I had mentioned in Our Debt Payoff Story, we had received an inheritance. It came in a few installments, and we had one coming up that could pay off the student loan and we could invest the rest. We ended up buying our house before it came, so I figured we would pay off the loans, put some in a Roth IRA for Mrs. iHB and I, and be done with my inheritance money forever.  But then…..

It was the night before our Hawaiian vacation, and we were excited to enjoy that big, yellow blazing ball of warmth that we had heard about, but never actually experienced (we live in the Northwest). My wife had a “feeling” though, and wanted to see if she was pregnant before heading out (Mai Tai or no Mai Tai?). And what do you know….turns out she was! WOOHOO! After a few minutes of the happy dance, we settled into bed and fell asleep, dreaming of the possibilities of a little one.

But now we had some HUGE decisions to make. Knowing that I could not pay for everything on my income alone (even with both jobs), how were we going to stick to our commitment to ensure that Mrs. iHB would be at home with our bundle of joy?! Were we going to have to sell our home, move into a cardboard box (with a cardboard crib for our little sweetie), sell everything we own, and eat the dog?!!!

After a few seconds of freak out, I realized we would just have to shift our plans a bit. We had a little over 6 months’ worth of expenses in our savings account, I was doing taxes and I could start looking at promotional opportunities at work. Our priorities had changed, and instead of paying off our debt, we decided to keep the money in a savings account until my income was enough to cover all the bills. I started applying for promotions at work like crazy. I worked hard to get my resume in shape, kill the interviews and follow up regularly with the hiring managers. Though I was turned down for three positions, I ended up getting a promotion (literally my first day was my wife’s last day at her job)!

Where We Are Currently

As it stands, we are anywhere from $400-$600 short every month, depending on the bills. This is based on a bi-weekly budget, without counting any of my tax income. With my tax income, and the two-3 paycheck months of the year, we amazingly end up at zero for the year. So my original statement may be a slight exaggeration. But we definitely try to live as though we need to make each dollar count. And we have been living this way even before we got pregnant and before buying a house. And when I start making $80,000 a month like a baller, we’re still going to make each dollar count.

I plan on still rocking my job like a boss, killin’ it and working my way up. I love what I do and have a passion for it, so that is goal #1. I also plan on steadily growing a good tax clientele. I enjoy helping people get their taxes done and allowing them to only pay the government what they are legally obligated to pay (which usually ends up saving them tons of cash over them doing it themselves or having some kid at Wal-Mart in an H&R block polo take a crack at it). I also plan on creating other income streams as well, online and through any number of ventures that I happen across. I love learning and challenging myself, so I think that comes in handy when some extra income opportunities arise.

Once we can pay the bills and have extra income each month, then it’s Operation: Kill Student Loan. Basically, it’s an all-out raid on our measly student loan debt . It won’t stand a chance. We’ll be throwing cash grenades and bi-monthly online payments to smoke this thing out, and once we’ve got our scope on it, there’s nowhere it can run!

After that, I’ll up my 401k contributions and start putting away a small percentage in our Roth IRA account(s). Then any extra after that will go toward our little one’s college fund. Still not sure about going ESA or just a brokerage account, but we’ll come back to that one later. While we’re investing, I also want to start up Operation: Annihilate Mortgage. I want to start adding $100 a month to our payment, and increase that amount at least every 6 months until we’re doubling our payment. Honestly, my major goal is to be completely debt free (including the mortgage) by age 40. And I’d love to get there sooner, but I am working on the numbers to see what it would take to pay it off in the next 14 years. I may need to start adding a little extra very soon if we are to reach that goal. I’ll write it out for you as soon as I feel like it 🙂

So, all in all, we’re not in an amazing spot right now, but we also planned ahead. I can say, without a doubt that we would be looking at a short sale and some crazy financial turmoil had I not been in the habit of tracking my money and sticking to a budget. I am thankful that I was able to see the whole picture and not freak out, but instead work on increasing my income and protecting our savings (from myself). I think by this time next year, we should be in a much better spot, ready to rock.

Comments: What do you think? How would you react if you realized you couldn’t cover all of the bills? Would that motivate you, or cause you to give up? Do you think we still have a shot at building a good financial future? Why or why not? And does anyone roll their eyes when they see the Olympics are sponsored by McDonald’s and Coke? That’s like Anheuser-Busch sponsoring A.A. I mean really, is Michael Phelps downing a Double Quarter Pounder and slamming a coke before jumping in the water? If he did, we’d probably witness the most epic side-ache in the history of man.