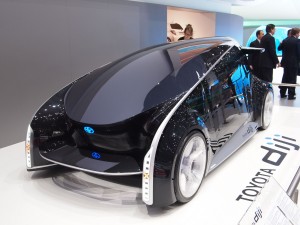 Hybrid cars are an amazing invention and an important step toward reducing waste in a world filled with 10 MPG, gas-guzzling hunks of metal. I appreciate the engineering and technology that goes into creating a vehicle that can quietly hum along and get over 50 MPG. But there is something seriously wrong with how people seem to approach the hybrid car purchase….

And that something is math.

I have been around a few of these conversations. Everyone involved is always so well-intentioned, the sincerity almost passes it off as an intelligent conversation. But there is always something amiss:

Person 1: “You see that new Toyota Prius, it gets like 50 MPG’s and doesn’t even need an emissions test because it’s so green.”

Person 2: “Yeah, I can’t believe how efficient that is. I mean, you could cut your gas bill in half or less with a sweet ride like that.”

Person 1: “Yeah, that’s what I’m thinking. I get like 18-22 MPG’s or something on my current ride. If I got 50 MPG, I would be saving so much money, the car would practically pay for itself.”

Person 1: “Yeah, I’ve got a test drive scheduled for this afternoon. It’s crazy how getting a fuel efficient car can really save you a ton of money. Heck, I can probably afford to go on that awesome vacation to Hawaii now! Thanks Toyota Prius!”

Person 2: “Totally jealous. I wonder if I could trade in my car and get a Prius too? Probably worth it. Heck, they could even roll my old loan into the new one….”

Now, that conversation may seem pretty normal to some of you. It sounds like a well-justified decision to get rid of the low-MPG ride and pick up a hybrid at little cost after factoring in the gas savings. I know many people who have done this very thing. But let’s run the numbers on this hypothetical scenario and see if this person is truly getting half off a hybrid car, or actually just wasting money.

BUT, don’t forget that with a car loan, comprehensive insurance coverage is REQUIRED. So that means his $60 a month is now $120 a month for auto insurance. Over a 5 year period, that’s an additional $3,600.

Now let’s talk about what his car in NOW worth.

Edmunds.com has some great stuff on it, and a little gem I found over there is this infographic on how much a new car depreciates. The numbers could make a grown, hybrid-owning man cry (not that it would take much) and are always tough to look at, knowing how many NEW cars I see on the road on a daily basis. Let’s apply this to our example above.

After 5 years, a NEW car is worth 37% of its original value.

But, What About The Gas Savings?!

“You’re totally missing the point here. Gas is stupid expensive, haven’t you been watching the news? The Prius cut the gas bill in half, OR MORE! The savings is in the 50 MPG’s!”

You’re right, I was being unfair. Let’s calculate the gas savings. But since people always seem to make this calculation wrong, let me show you the RIGHT way to do it.

Conclusion: The Toyota Prius saved $1,870 in gas over 5 years compared to the Honda Civic. $6,290 savings over the current 18 MPG vehicle.

I know I just threw around a lot of numbers. But here’s the bottom line:

If that doesn’t look like a good deal it’s because it isn’t. In fact, it’s a complete waste of $19,000. Buying a new, hybrid car is like taking a can of gasoline and book of matches to $19,000 of your hard-earned money. But it’s even worse than you think.

I’ll leave it at that. And just remember, this is the BEST case scenario when buying a new car. There are still many people who by low MPG cars and are not saving ANY gas money. It only gets worse from here. Bottom line: You don’t need a new car.

Comments: Have you justified get a hybrid based on the “great MPGs”? Did you ever do an ROI on that purchase? Does the math make you reconsider that purchase? How many people out there are currently driving a hybrid?

66 thoughts on “Your Hybrid Car Is A Waste Of Money”