Dollar by dollar, I managed to unload over $100,000 in less than three years. I am pretty sure I kept a few retailers in business and helped pay for a few mall fast food employees’ college tuition with the way I blew through my cash. Now, I did not earn any of this money, mind you. I actually received it in a lump sum at age 18.

How Did I Get It?

It’s actually a sad story how I received the money. At age 4, my father passed away from melanoma skin cancer. Unfortunately, he was not properly diagnosed resulting in a failure to catch the cancer before it had metastasized (entered his blood stream). By the time they figured it out, it was too late. I’m a little sparse on details, but some kind of law suit happened and money was put away for me in an annuity. I would receive this money at age 18, 21, 23, and 25.

I was also in a car accident just before I turned 18. My buddy and I were in his speedy little car on a small highway near my home. At least, that’s what I was told. I actually have no recollection of the accident and can’t remember anything up until 2 hours before it. My buddy was driving about 120MPH and decided to try and pass a car at this speed. The car tried to move out of the way, my buddy hit the brakes and turned the wheel and we ended up sideways on an embankment. The car flipped 6 times, each time landing on the roof on the passenger side. My head was compressed each time and the pressure exploded the vertebrae in my neck. My bones literally exploded from the pressure.

All I remember was waking up in the hospital, hooked to a bunch of wires and my neck was sore. It was an absolute miracle I was alive. I was just an eighth of an inch away from severing my lifeline in my spine. I was not paralyzed and didn’t even have to wear a halo neck brace. I was set for recovery in 3 months. During recovery, we resolved details of the settlement with the insurance company to recover money for damages (and future medical bills!). 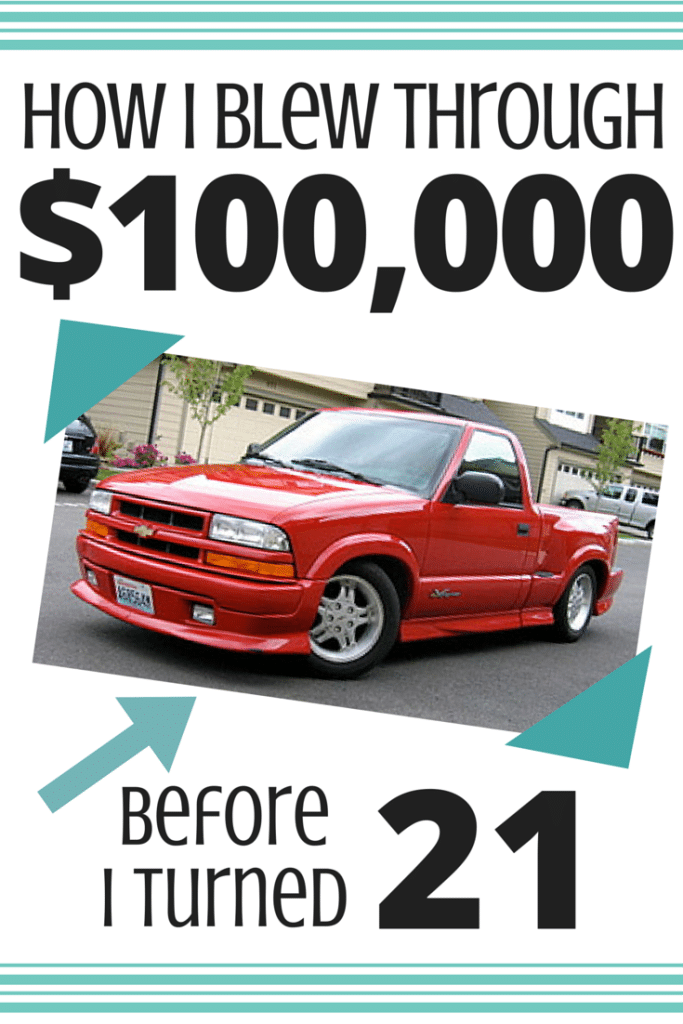 What Did I Do With The Money?

At this point, I had close to $100k in the bank. A RIDICULOUS AMOUNT for an 18-year-old kid without much financial training and no plans after high school. I had no idea what a budget was, let alone how to save money for anything. Of course, the first thing I was going to do was to get a sweet ride!

But instead, since I didn’t really know ANYTHING about cars at the time, I decided to get a two-seater low rider truck with tinted windows. It was the shiniest thing on the lot, so naturally I gravitated toward it and bought it quickly, because hey, I had the cash (I have since learned about cars and regret this decision). That’s $9500 gone in a day. And what’s a car without a bumpin’ stereo (don’t forget, I was a gangster)? So I went to a recommended car stereo shop and dropped $4,500 like it was nothing. Subwoofers, new speakers all around, and of course, a DVD player. I ended up hooking up my Xbox and Playstation 2 in the car, along with a rear-facing camera, black lights on the interior, and red underglow (to match the candy-red paint). Pretty much a baller. To top it off, I bought some hot 100-spoke 18″ rims (by hot, I don’t mean temperature).

I was in and out of Community College and then decided that school was for suckers (I was an idiot). But not before dropping about $4,000 getting a few credits. I did end up buying my mom a Cadillac for $4,000 for Christmas because her car was dying. That was kind of cool. And after playing a lot of HALO, I decided that I should probably go to school again. I enrolled in an art school, but only paid half the tuition and pulled out loans for the rest (though I had the money to pay it all). There’s another $16,000 gone. I decided I was going to take this seriously, because you know, I was going to be some famous music producer after school. So I quit my job and lived off my extra cash. At $1,500 a month for 18 months, that’s another $27,000 smackaroos down the drain.

And that’s all I remember spending my money on. Which is weird, because it doesn’t account for the other $35,000 THAT I SPENT SOMEWHERE?!?!?! Wow. I do remember eating a lot of mall food, buying a lot of clothes at Abercrombie (because I was now a rich, preppy kid and had to dress the part), and generally not looking at receipts. But I honestly could not tell you with any sort of accuracy where that $35k went off to. All I can fathom is that I help stimulate the economy for a few years and helped a few employees earn their commission for the month. UGH! I kind of feel sick every time I think about it.

Mostly, I learned that you should NEVER GIVE MONEY TO A KID WHO DOESN’T KNOW WHAT TO DO WITH IT! Heck, you shouldn’t give money to ANYONE who doesn’t know what they are doing with it. If you don’t set out a plan and set goals for your money, it will disappear faster than Britney Spears’ acting career. That’s why most lottery winners go broke within something like 5 years. They couldn’t manage their money before winning the lottery (evidenced by them buying lottery tickets) and the only thing that changes is now they have a ton more money to mismanage. I also learned that if you’re a spender, you should lock your money away where you can’t touch it until you have a solid plan. Luckily, I threw $10k in a Roth IRA so that money is still there today. I had also put $50k in CD’s earning about 5.5% (Oh, how I wish I could get that rate now). BUT, I had put a contingency on the account saying I could withdraw the money anytime I wanted without penalty. And withdraw I did!

It’s sickening to think about the interest I could have earned with an extra $100k in the bank for 8 years. I could have paid off half my house by now! Heck, I could have bought a rental home and started making some extra passive income. I could have at least bought a Toyota Supra Mk4 and had a real race car to show for the money! Well, looking back, it’s easy to see all the mistakes I made and regret not making different decisions, but there’s nothing I can do about it now. All I can do is appreciate any dollar that passes through my hands and make sure that I use them all THE RIGHT WAY from now on. Now that we have gotten on a good financial plan, I know exactly what I would do with $100k. Pay off debt ($15k), Max out our retirement accounts (401k $17k, Roth IRA’s $10k), start a college fund ($3k-ish), pay down our mortgage so we can refi (probably like $40k-ish), put $10k away for our job replacement fund (Mrs. iHB is now a stay-at-home mom, still working out the income loss), and go on an all-inclusive vacation to Jamaica ($5k). Woohoo!

Comments: Have you blown through a large sum of money? How do you feel looking back at all the money you have spent somewhere, but you have no idea where it went? What would YOU do with a cool extra $100k in you bank? Anyone want to help me lay 2000 bricks in a few weeks? I’ll pay you nothing and even play some Journey on my outdoor speakers (who doesn’t like Journey, amirite?)

Though that shiny red truck was a worthless investment it sure did get him noticed!  Only reason I started talking to him was because of that thing!  Now if “hot chicks” were on the top of his priority list at the time, he spent his dollars wisely 😉  What 17-year-old girl doesn’t want to date a baller??  If not for those black lights and bumpin’ bass, I’m not sure where we’d be today 😉  But seriously, he has a good personality too…it’s not all about the money….